How to Teach Your Kitten to Use a Litterbox

Training a kitten to use a litterbox is typically easier than training a puppy to go potty outside. Most kittens who are at least 8 weeks old will already know how to use the litterbox, but some kittens, especially younger ones, may still require some help from you. Here's how to train a kitten to do his business in the litterbox. 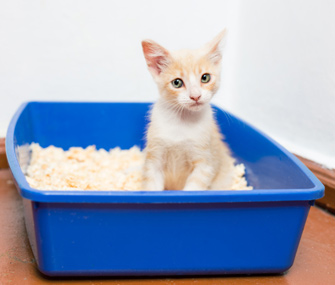 You can encourage your kitten to use the litterbox by placing him in it at regular intervals, especially if he's recently eaten or awakened. Place him in the box and wait to see what happens. Most kittens will naturally start to dig in sand or litter by about 4 weeks of age — if you see your kitten doing this, don't interfere. If he doesn't do anything, try gently taking his front paws and scratching the litter with them. When you let go, he may continue doing it on his own and then feel compelled to go ahead and eliminate.

Most cats prefer some privacy when they eliminate. So if you hover over him or try to help, you may convince him to go elsewhere. Instead, give him some space, then praise him and offer a treat when he's finished.

If you find your kitten eliminating outside of the litterbox, quickly pick him up and deposit him in the box. Don't yell or be rough, which will just frighten him and possibly cause him to associate the litterbox with punishment. Cleanse soiled areas with an enzyme-based cleaner. It's helpful if you place the waste in the box, so your kitten can follow the scent to find the litterbox.

Choosing the Right Box and Litter

Start by making sure you have the right number of litterboxes: You should have at least one per cat, plus one extra. If you have more than one cat, place the boxes well away from each other, as some cats can be territorial about boxes. You can use a smaller box for a kitten than for an adult — in fact, be sure the kitten can get over the sides without having to jump. The box should be made of nonabsorbent material (no cardboard, unless it's just for a day). Many people prefer litterboxes with tops, as they look better and contain odors better. However, some cats don't like using covered boxes. When first starting, you'll probably have better luck with a topless litterbox.

Place the box in a quiet location away from your kitten's eating and sleeping areas and separate from high-traffic areas, but close enough so the kitten doesn't have to go far to find it. Make sure that closed doors can't block the kitten from accessing it. A corner location is best, because it allows your cat to keep a watchful eye on his surroundings when he's in the vulnerable act of eliminating. Once you've found a place for the litterbox, leave it there. Don't constantly move it around.

There are many types of litters to choose from, including clumping, nonclumping and crystals. You might want to experiment a bit to see which type your kitten prefers. The depth of the litter may vary, again, by your kitten's preferences. But adding more litter is not an alternative to cleaning the box.

Scoop out any solid wastes at least once a day and change the litter entirely at least once a week. Never throw litter down your drain pipes, as it can cause costly plumbing problems. Avoid using scented litter or strong-smelling cleaners, as these strong odors may repel the kitten.

If your previously litterbox-trained cat begins to eliminate elsewhere, it may be for a number of reasons, including: You've changed litter type, haven't changed the litter enough, have another cat who is keeping him out, have used a strong-smelling cleanser on the box or have made some other change relating to the litterbox. But it could also be because your cat has a medical problem. When in doubt, always consult your veterinarian.

Tofu Cat Litter are made from 100% natural ingredients :pea fiber(faster water a...

Pine cat litter is made from all natural pine sawdust by high pressure and high ...

Silica Gel Cat Litter is one kind of latest and ideal cleanser for pet and posse...

Bentonite cat litter is traditional cat litter product,which is made of 100% ben...

It is made of cotton-like paper pulp and macromolecular absorber, our pet care p...

It's a kind of clumping cat litter made by 100% natural bentonite. It's with sup...

As silica cat litter is a popular cat litter, many customers want to know how to...